Sara Ali khan is the daughter of the famous Nawab turned actor Saif Ali Khan and wife Amrita Singh who is also an actor in Bollywood. The gorgeous 23-year-old star child was born on September of the year 1993. She was brought up in the Royal Pataudi family with a lifestyle as that of a princess.

She was brought in the khan family as the first child. She has a younger brother Ibrahim Ali Khan who has debuted his career in Bollywood with the movie “Tashan”. However, there are rumors of her soon debuting in the Bollywood industry with Karan Johar’s Banner under the direction of Karan Malhotra.

Her parents Saif Ali khan and Amrita Singh were married in the year 1991. They later got divorced back in the year 2004 and she is currently living with her father. However, back in the year 2012, Saif Ali Khan was married to Kareena Kapoor. Sara and Kareena have a good bonding together and it is also rumored that Kareena is helping her step-daughter for her debut in Bollywood Industry. Sara is also extremely close with her father Saif, however, there is no information about her relationship with her mother Amrita.

Apart from her interests in acting; traveling, playing tennis and dancing are among her other hobbies. She has traveled to many places like Goa, London, New York and Dubai which are also some of her favorite destinations.

Sara Ali khan was brought into media’s eyes after she was featured along with her mother Amrita Singh in the magazine Cover “Hello”. After her photo feature, she started getting tons of offers on movie projects. But however, she denied the entire proposal as she was busy with her studies. Apart from her photo feature, she has also done some modeling as well. She did a ramp walk in the Ambani Party where she was able to captivate many people’s attention. In the party, she wore this beautiful outfit designed by the famous designer Abu Jani-Sandeep Khosla.

Besides her career, Sara khan is academically inclined as well; which is what young people should be doing. She was reported to be Pursuing her Studies at the Columbia University based in New York City and has already graduated from her studies.

Sara Ali khan was once rumored to be dating the grandson of the former Union Minister Sushil Kumar Shinde, Veer Pahariya. But lately, she was rumored to be dating Ishaan Khattar who is also the half brother of Shahid Kapoor. The duo is set to debut their career in Bollywood with the upcoming movie “student of the year 2”. 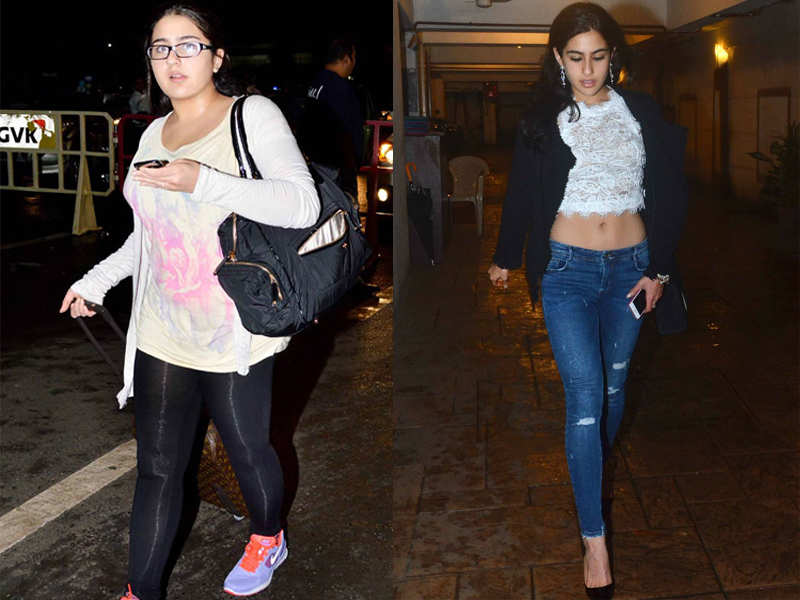 Sara Ali Khan has a brown eye color and her hair color is dark brown. she’s got an hourglass body figure which measures to be around 32-25-34. Sara is five feet four inches in height and her body weighs around 52 kg now.

Sara Ali khan is also famous for her weight loss transformation. She has lost a major amount of weight for her movie debut.